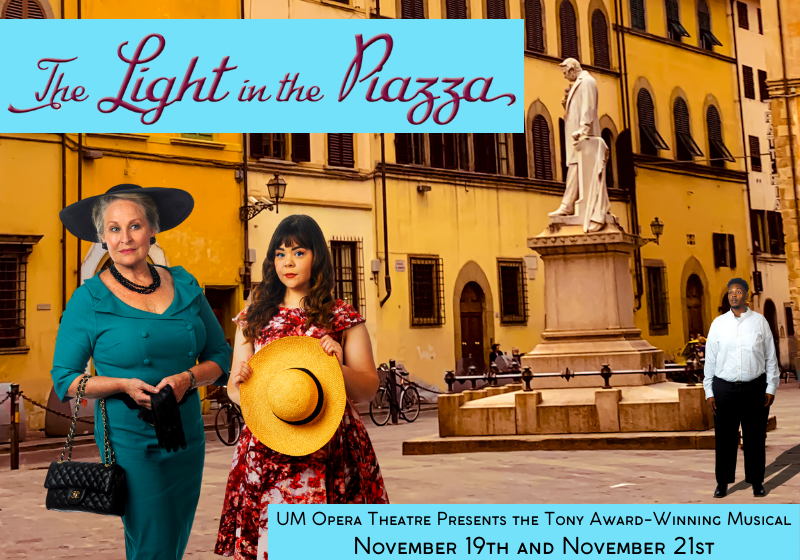 The Light in the Piazza, UM Opera Theatre

The Light in the Piazza’s rich emotional score makes it notable among recent Broadway musicals. Unapologetically lyrical and romantic, it transports us to the 1950s world of Margaret Johnson and her daughter Clara, Americans abroad in Florence. When a fateful gust of wind introduces Clara to handsome young Italian Fabrizio Nacarelli, it’s love at first sight.

But Clara isn’t quite what she appears, and this story of how Clara, Margaret, Fabrizio, and Signor Nacarelli negotiate emotion, love, hope, and clashing cultures – and the musical score that underpins their remarkable journey – results in an unforgettable show that won six Tony awards.

The Light in the Piazza is presented by the University of Mississippi Department of Music and its partners in celebration of Spencer’s 100th birthday year.

Starring Mary Donnelly Haskell in the role of Margaret Johnson and Calvin Ellis in the role of Signor Nacarelli, with LA producer/director Blake McIver Ewing directing.

Composer Adam Guettel, who wrote the show’s music and lyrics, will be on campus November 3-5 for a residency at UM Music. Guettel is the grandson of Rodgers and Hammerstein’s Richard Rodgers, and he won two Tony awards of his own for Piazza, including Best Original Score and Best Orchestration for his lush, memorable music. In a series of public lectures and interviews, Guettel will talk about his work and Spencer’s novel, the composition process, his repertoire and family legacy, and the musical’s place in music theatre and Broadway history.  Information will be posted at music.olemiss.edu/calendar.